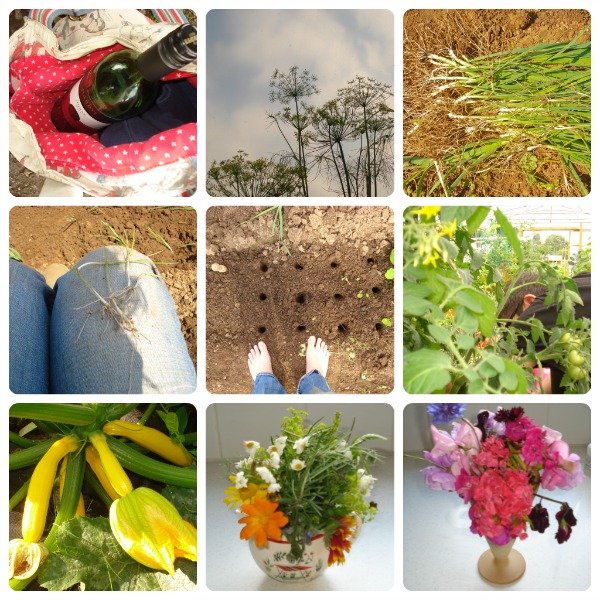 There was an Open Day at the allotment this weekend, it was supposed to be on Saturday but with Red Warnings for floods and already sodden ground it was postponed until Sunday.  There were a number of activities including a quiz, and as it turns out I got 100% in the quiz and won a bottle of wine!  Laura and I then worked on getting sloshed so the rest of the photos aren't the best quality, sorry about that.

The big job of the day was thinning out the leeks, if the packet says sew thinly you don't just chuck the whole pack in and hope for the best cos the little buggers grow.  Each leek has to be dropped into a hole and then watered, you don't fill with soil because they need room to fill the space.  I anticipate hating leeks by the end of the year having so many, but I've never grown them before so at this stage I'm still excited.

The tomatoes are still growing but none of them are turning red, am I just being impatient?  Luckily though the courgettes are finally coming along quite nicely, the yellow variety are a winner and so sweet, definitely growing them again.

And finally there were several little bunches of flowers being sold, with everything from rosemary to sweetpeas in each bunch, they smell amazing and give me a good excuse to get my ice cream cone vase out.