A (couple of) Month(s) of Reading 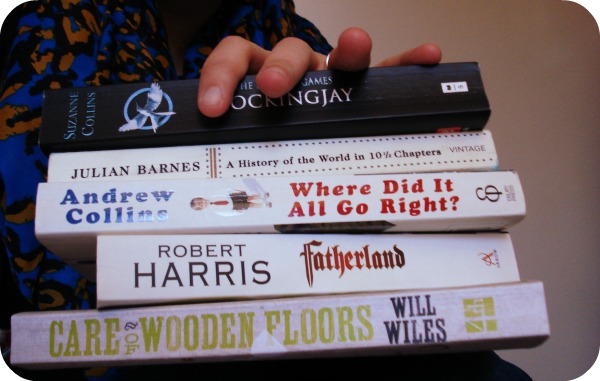 Oh my days!  September was hectic and not much reading was to be had sadly, but here is what I've been working through during those rare moments of spare time.

Awesome.  But most of you will know that already right?  I'm a bit late to the Hunger Games party but I got there in the end.  My brother described the trilogy as 'moreish' and he is absolutely right.  Mockingjay is the final book in the trilogy and it's a corker combining the best and worst of human behaviour.  Katniss is a character with fight, opinions and whose ambitions reach beyond getting married *significant look towards the Twilight books*.

2. Where Did it all go Right? by Andrew Collins

If any of you listen to BBC 6 Music on a regular basis you'll know Andrew Collins.  I love it when he's on the radio and I find him really funny so when I found his autobiography in a charity shop I thought 'ooo go on then'.  This is a really light hearted book and is the antithesis to the glut of misery memoirs on the market.  Here's the story of someone who had an ordinary upbringing, and had a good time! It's nostalgic and funny, and if you have read and enjoyed 'The Tent the Bucket and Me' by Emma Kennedy you'll more than likely enjoy this too.

Robert Harris is turning into my go to author for that 'in-between' read.  Don't get me wrong that in no way reflects negatively on Harris or his writing, it is in fact a huge compliment.  You know when you've just finished reading a superb book and don't know what to read next?  Harris writes really gripping stories and this is no exception.  Based in 1960's Berlin, in a world where Germany won the Second World War and Europe has been consumed by the Fatherland.  Life is full of suspicion, strange occurrences and sudden disappearances being investigated by a detective whose jaded outlook of the system makes him a target of the powers that be.

4. Care of Wooden Floors - A Novel by Will Wiles

Bobbins!  Absolute boring, boring writing, no pace, rubbish characters and a pointless waste of my time.